Recently, an incredible video of Steph Curry making 103 threes in a row went viral. Which made me wonder: Is Steph Curry the best 3-point shooter of all time? And who else is on the list?

I was especially curious, considering how important the three-pointer is in today’s league where almost 40% of all shots are from deep!

So I went to basketball-reference.com and got the data of every shot ever made in the NBA (now updated until the 2021-22 season) and did some digging to find out!

The chart below shows every shooter in NBA history who made more than 200 threes in their careers.

But some players clearly stand out:

Charles Barkley’s three-point shot seems to be about as accurate as his golf swing: In fact, he ranks second to last in percentage among all players that made more than 200
three pointers.

Kobe Bryant will be remembered as one of the best basketball players of all time, but not because of his 3-point shot. While he made 1827 treys during his career (ranking in the top-20) he only made a below-average 32.9% of them.

Lebron James is another player who made a lot of threes in his career (2140) while shooting a slightly below average 34.6%.

Since we are on a website called “The Hoops Geek”, I went into full geek mode and came up with a formula to rank 3-point shooters. My goal with the Hoops Geek 3-Point Rating is to rank players using a combination of accuracy (3P%) and volume.

Now, this formula might look crazy, but the idea behind it is actually pretty simple: I’ve drawn all players on a chart and measured the distance between a player and the origin of the chart. The y-Axis of this chart was stretched by factor 2 to increase the weight of accuracy and the sum is then divided by

to standardize the results on a percentage scale.

To give you an idea of how the scale works: A player shooting the highest percentage while also making the most 3-pointers in NBA history would get the perfect 100% rating. The worst shooter of all-time would be close to 0%. 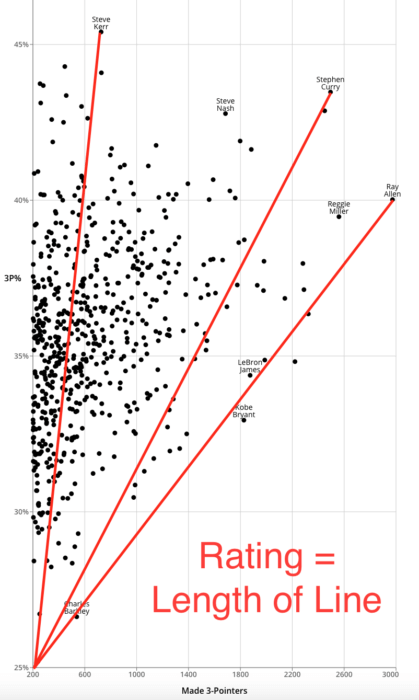 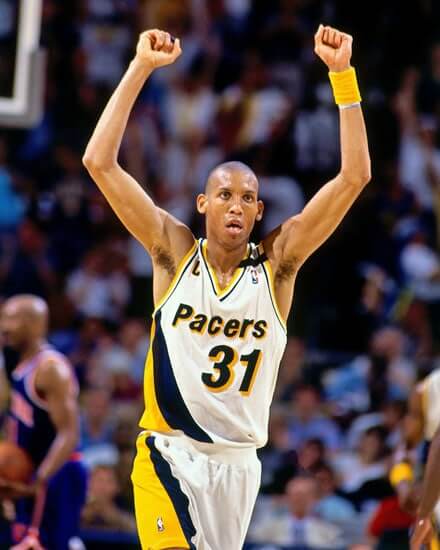 He also has one of the most memorable games in NBA history when he scored 8 points in the last 8.9 seconds in an astonishing comeback victory against the New York Knicks.

There’s even an ESPN 30 for 30 documentary made by director (and huge Knicks fan) Spike Lee about the torture Reggie Miller used to inflict on New York. 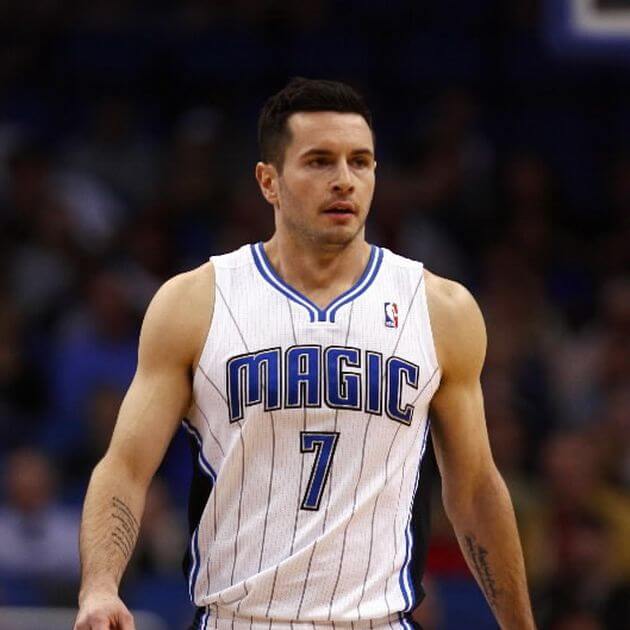 His career 41.4% 3-point percentage is even more impressive considering that he isn’t known for shooting wide-open 3-pointers but takes a lot of difficult shots coming off of multiple screens with a super-fast release. 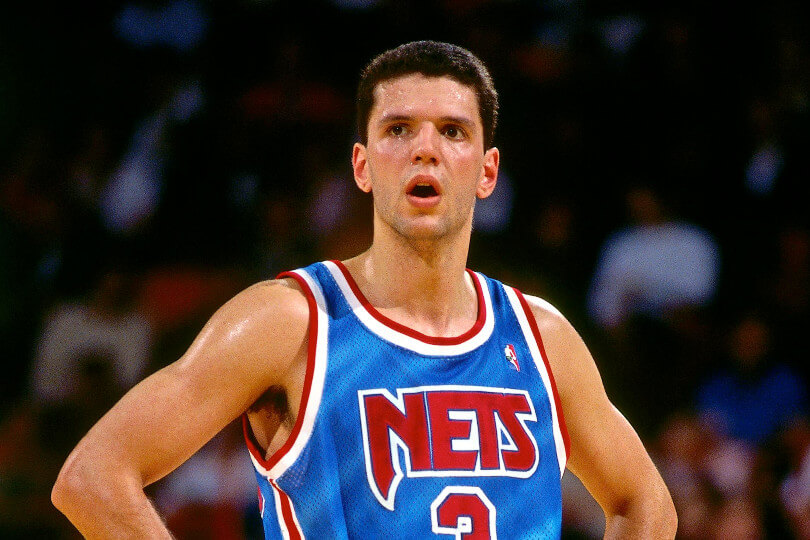 He was an absolute sniper from the 3-point line with a career average of 43.7% ranking #5 for three-point percentage among qualifying players. If he had played longer and made more than his 255 career makes he could be ranking much higher on this list! 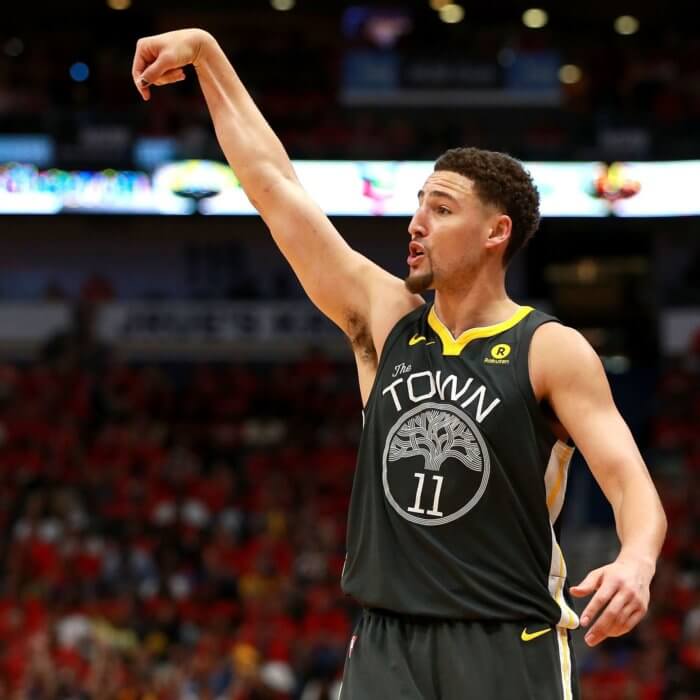 He is part of the Golden State Warriors “Splash Brothers” (together with Steph Curry) and set a new record for most threes in a game when he made 14-24 shots from beyond the arc against the Chicago Bulls in 2018.

To round out his resume as one of the best 3-point shooters of all time he won the NBA All-Star 3-point contest in 2015-16. 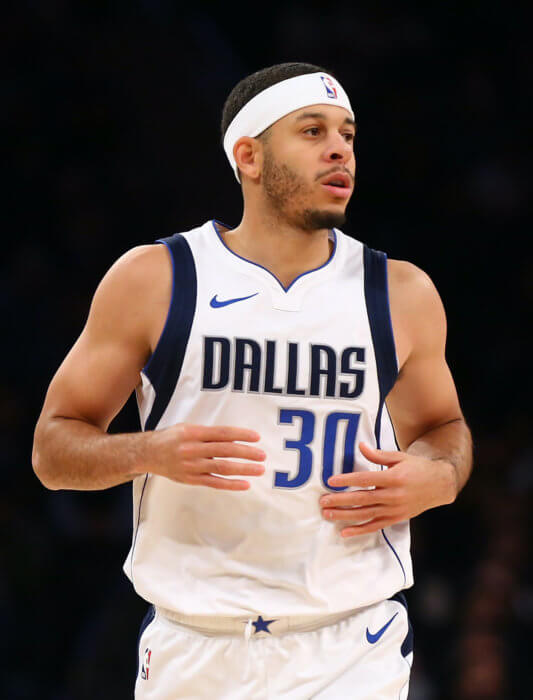 # of 3s
730
3P%
44.0%
Rating
77.0%
Seth Curry had a slow start to his career playing in the G-league and bouncing around from team to team for a while until he established himself as an NBA starter in 2016/17 with the Dallas Mavericks.

He made this list not because he has made so many three-pointers in his career but because of his insane accuracy: he’s shooting 44% from deep which ranks him #3 in 3-point percentage among players who made more than 200 threes in their career.

He is also playing an important role for the Philadelphia 76ers. Expect him to rise the ranking even further in the next years! 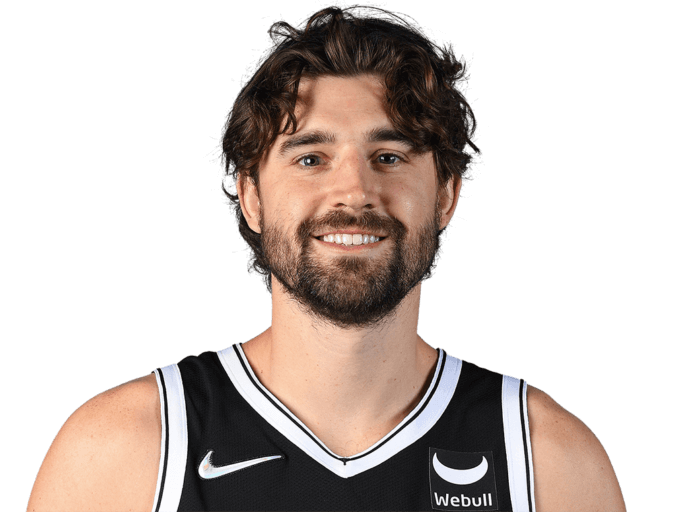 # of 3s
874
3P%
43.9%
Rating
77.5%
Joe Harris is one of the most accurate 3-point shooters in the NBA and an important part of the Brooklyn Nets’ chase for a championship. Ranking #7 on this version of the list I expect him to further climb the ranks as he is still only 30 years old. 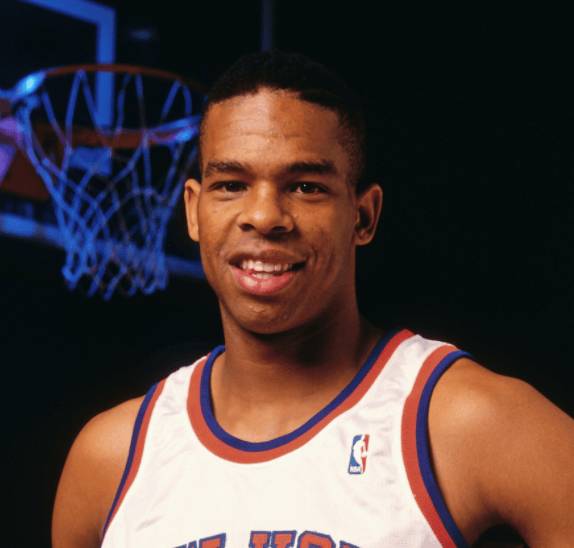 Hubert Davis is probably the least-known name on this list. He was drafted in 1992 by the New York Knicks coming out of UNC. He played his first 4 seasons with the Knicks before spending time with the Toronto Raptors, Dallas Mavericks, Washington Wizards, Detroit Pistons, and New Jersey Nets before retiring in 2004.

He posts a 44.1% career 3-point percentage which ranks him third all-time. He participated in the tree-pint contest three times but never managed to win it. 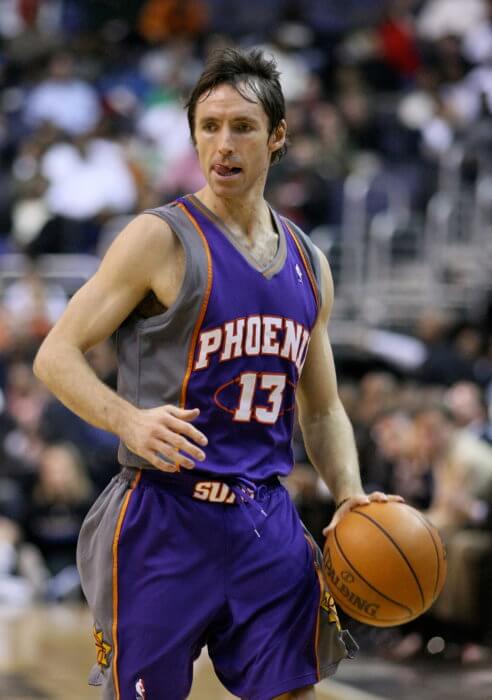 As a pure point guard, his first instinct was to set up his teammates for open shots or easy dunks. That makes it even more impressive that he made 1685 3-pointers with an elite 42.8% 3-point percentage!

The Phonix Suns never won it all, losing against some of the best teams of all time like the Spurs or Lakers. Rewatching games, Steve Nash actually said that he wished that he had shot more and been a little more selfish during his playing career – he could have been #1 on this list! 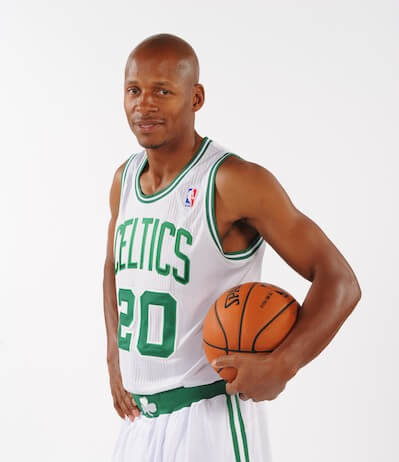 He played in the NBA for 18 years for the Milwaukee Bucks, Seattle SuperSonics, Boston Celtics, and Miami Heat, made the All-Star team 10 times, and was inducted into the NBA Hall of Fame in 2018.

He is most famous for hitting a 3-pointer in the closing seconds of game 6 of the 2013 NBA finals after an offensive rebound by Chris Bosh to tie the game, eventually stealing the NBA title from the San Antonio Spurs. 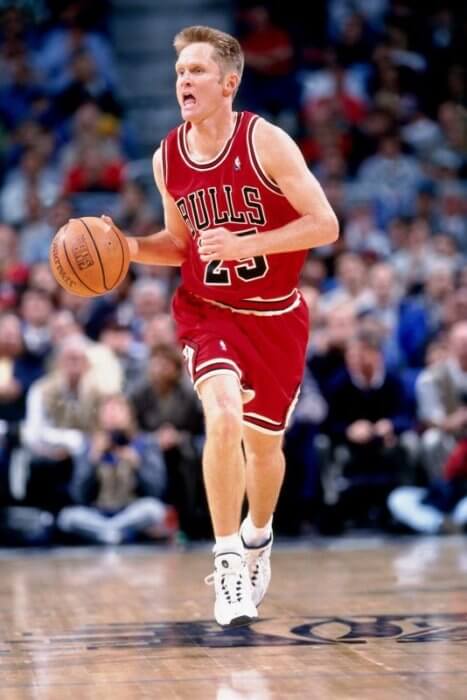 He played during the ’90s when shooting threes was not nearly as common as today and averaged only 1.8 3-point attempts per game which explains the relatively low overall number of made threes. Compared to this era it’s hard to understand why he didn’t shoot more – Steph Curry took 11.7 3-point attempts a game in 2018-19!

Today, Steve Kerr is best known for coaching the Golden State Warriors. But before that, he was famous for being a sharpshooter for Michael Jordan’s Chicago Bulls and Tim Duncan’s San Antonio Spurs winning five championships.

The most famous moment of his playing career is undoubtedly when he nailed an open jumper assisted by a double-teamed Michael Jordan to clinch the 1997 NBA championship. 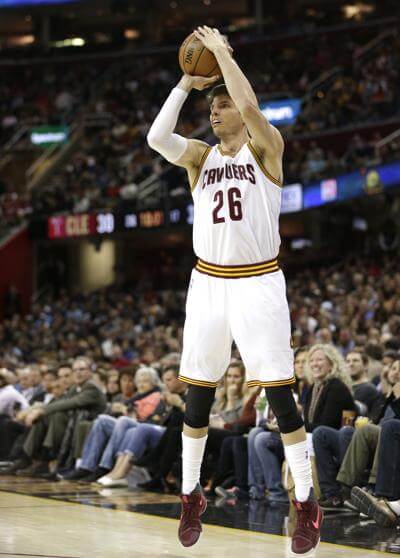 Today, Kyle Korver ranks #2 on this list thanks to his elite 3-point percentage (42.7%) while shooting a LOT of threes during his NBA career (ranking #4 at 2450 made threes) – not bad for a guy who was “traded for a copy machine”!

He made the NBA All-Star team in 2015 with the 60-22 Atlanta Hawks and played in the 2017 and 2018 NBA finals with the Cleveland Cavaliers alongside Lebron James (losing both times to the Golden State Warriors). 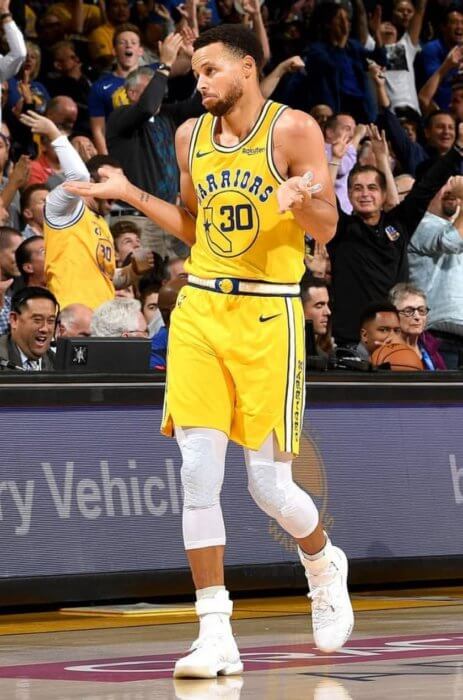 Steve Kerr could only dream of shooting off the dribble or pulling up from the logo like Steph Curry does almost every game!

He passed Ray Allen to become the NBA player with the most 3-pointers ever made on Dec. 14th 2021 and I am sure there are many more to follow! 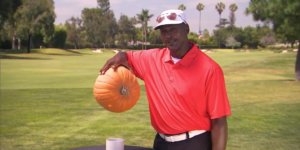 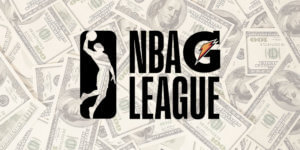