When we watch our favorite NCAA, NBA, and WNBA teams run beautiful offensive sets, it’s tempting to think we can install those with the youth basketball teams that we coach. However, with youth basketball, simple is often better. Your players likely do not understand the nuances of offense, reads, concepts, and third or fourth options on plays – yet.

Keeping it simple allows your players to focus on mastering fundamentals, grasping the basics of the game, and learn from the mistakes they make along the way.

How to Introduce First Plays for Youth Teams

When you are first introducing plays for younger athletes, one strategy to use is whole-part-whole.

First, show your team the entire play, explaining the basic concepts of whatever you are showing them. Then, start breaking the play down part-by-part – slowly. Finally, let them run it 5 on 0 before introducing the defense.

Sometimes, the best way for your team to understand the offense is to teach it in 5 on 5, stopping play in order to explain reads, reactions, and the play in general.

There’s a lot of debate in youth circles about what youth teams should be running on offense. Some believe youth players should just be taught motion offense without any real plays being called. Others believe the structure of plays help players understand the game better. A lot will depend on the skill level and basketball IQ of your team.

Five Out Pass and Cut

This is a simple, foundational offense that can be run with youth teams. It’s a very popular way to teach the game, spacing, cutting, passing, and game reads

Five Out Pass and Screen Away

Shallow is a simple set to get your team penetrating the defense with the dribble.

This ball screen play didn’t have a name until one of my teams labeled it “NASCAR” because it scored points so quickly.

Zone X can be run as a play against zone defense. What makes this play effective is that it is a continual pattern that attacks the zone intelligently.

This simple 4-Out zone attack puts players in positions to attack gaps, cut through the zone to apply pressure, and flash into open spots.

​​Zone Loop is a quick hitter set that uses cutting and a ballscreen to attack gaps in a zone.

Easy Baseline Out of Bounds Plays

This extremely simple inbounds play will help you to get the ball thrown in without turning it over and maybe score some points.

This is a classic set that has gotten many teams layups over the years. The pick-the-picker action confuses the defense and leaves open opportunities at the rim.

“Solo” is a simple and effective set to create a two-man game between a shooter and post player off a sidelines out of bounds situation.

If you want to draw up your own plays, check out the Play Creator App. It allows you to design plays with an easy Drag & Drop interface. Give it a try!

If you want to educate yourself further, you can learn how to draw up plays here or find more inbound plays here. 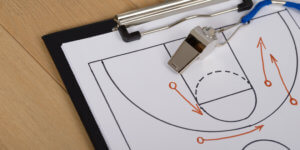 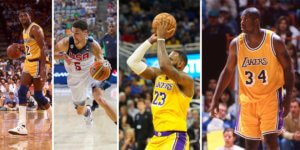 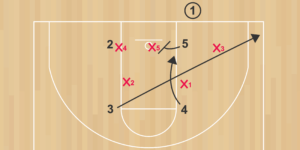